Progress has been quite good had a few nights on the van and managed to knock up the seat boxes and run the wiring for the electrics to the battery which is going to be mounted under the front seat . I have still to run the wires for the Split charge relay, I hope to do that this week .
Sorted the flat battery problem we kept having looks like the Axillary water heater for the engine is causing a drain so its been disconnected for the time being and also sorted the heater plugs out ,the light was on all the time after testing the relay and wiring I found out it needed 4 new ones so got a set of 4 off ebay and fitted them .. 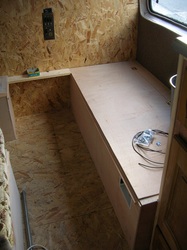 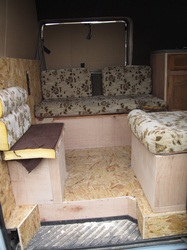 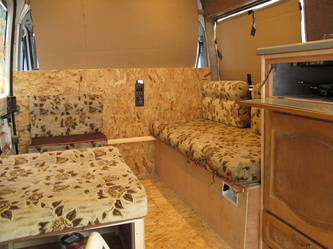 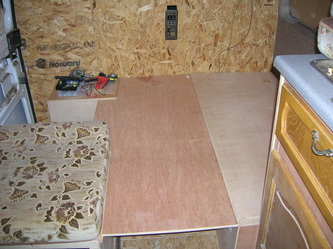 A few more nights on the van and the bed was finished we sorted all the cushions out and trimmed the foam to make them fit ,after a trial bed making they fitted a treat ,so now the wife is going to make new covers for them .
We have now covered the seat boxes and bulkhead panel with carpet I have just to finish off around the step area then that is ready for the floor covering.,we are planning to fit LED lights into the step to light it up when the door is open .We have also started to make the cupboard over the sink ,we used the one out of the old caravan and covered it in new plywood . 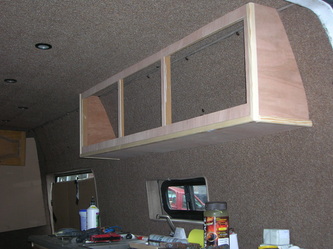 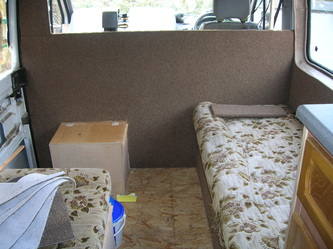 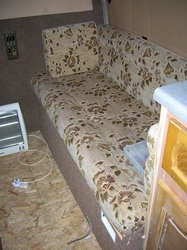 We have trial fitted the doors to the kitchen cupboard and it looks good ,just needs a light sanding then a few coats of satin stain .
After the kitchen cupboard we made a small locker over the widow this has a couple of pigeon holes in it and speaker for the radio , after a couple of trail fits we covered this in carpet and have now fitted it back in the van ,I have also wired up 2 swivel lights ideal  for reading when in bed .

I have finally got round to finishing the cooker,sink and  drainer these have now been screwed into place and I have also  tested the gas system for leaks with soap ,the fridge is now working on  gas ,12 volt and 240 and has finally been fitted into the unit. 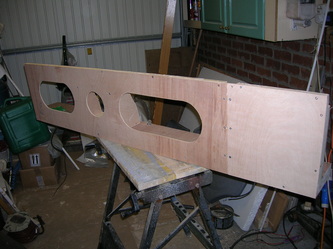 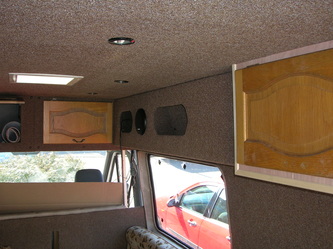 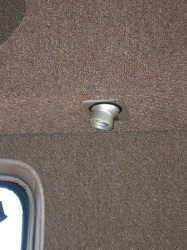 The cupboards over the sink are now done they need a good sand  this will be done towards the end due to the dust .

We had to remove the fridge again this week  as I wasn't happy with its performance it didn't work as good as it did on the test bench it looks like it probably due to it not being level but took the opportunity to to make the vent more efficient closing all the possible gaps allowing it to cool much better ,the fridge is now fitted back in the van so watch this space.
We  have now  made a start on the bathroom and have used some panels from the old caravan including the shower tray ,some of the panels  needed to be trimmed to fit but will be skimmed with plywood when done .

We decided to make a hatch in the back of the bathroom wall to help when emptying the toilet this  can be lifted through it so we don't have to struggle going  through the van .
Again we used a door from the old caravan and I have gone round the edge with stainless steel angle to finish it off ,we skimmed over the old caravan panel with plywood and then fitted the bathroom door from the old caravan ,I had to rework the lock and locking bars but it now fits a treat.
We are now able to fit the shower tray and drain later this week ,then we can fit the sink and run the pipe for the water .
I have also started to repaint the wheels on the van bit of a fill in job really but they look good when the centre is fitted which we purchased from ebay . 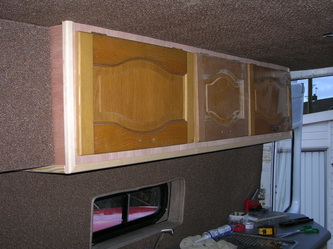 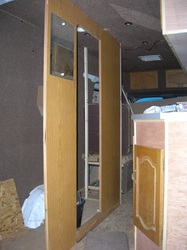 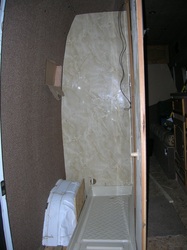 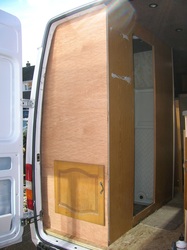 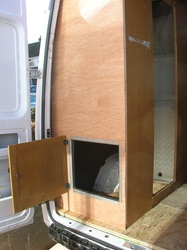 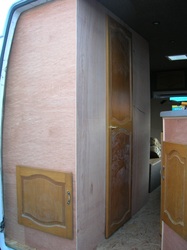 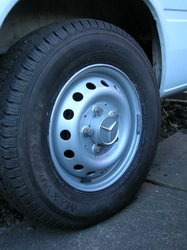