After much searching the local paper and internet, travelling miles to be told 'oh its a minter' only to find it wasn't ,we settled on a Mercedes Sprinter 311 CDI  medium wheel base, I believe we have made the right choice and hopefully have a good strong base to work from.

The van was an ex ground work van so has the usual knocks and scrapes but they were just cosmetics and the body is sound plus  it was ply lined inside, it even had all the previous mots to confirm the mileage . 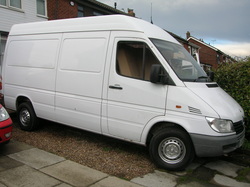 Mercedes Sprinter Medium Wheel base High Roof
One of the first jobs we did was remove the ply lining we initially thought we could use this again but it was badly contaminated with spilt diesel so we took it out and degreased the floor to get rid of the smell .This job was given to the wife she's good with the Mop!!!!
The diesel had soaked through the boards on the floor and softened the felt they used to line the floor so it took a bit of shifting, once removed we inspected the floor to check for signs of corrosion everything was fine here ,after 3 or 4 good washes the floor looked better and smelt fresher we decided to paint the floor with a rust preventative paint ,we decided to roll this on but this soon changed as the paint melted the rollers pretty quick but once done the floor looked much  better.

Another  job I decided to do was to  clear out both front steps and sliding  door step as they were full of soil so I needed to get it out and inspect the floor, again apart from localised rusty patches the floor and steps were solid so a good clean off with the wire brush and sanding discs were in order ,we then treated the bare metal and  painted with a good metal paint .
We decided to order new door aperture seals as they had seen better days I ordered the rear door seal from Mercedes as this was a dealer only part but managed to get the other seals from woolies who supply it by the meter great service by them it was here next day delivery . 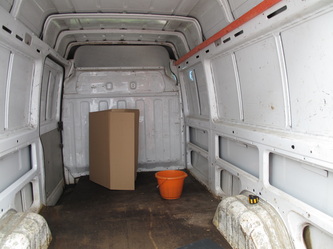 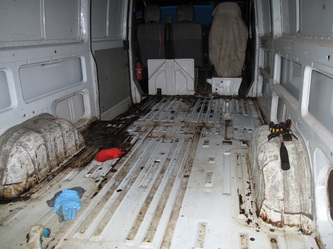 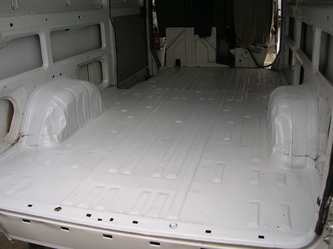 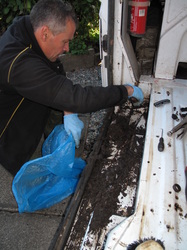 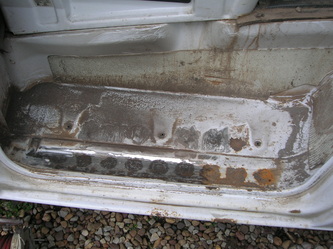 At some point in the life of the van the rear doors look to have been damaged with the wind and blown against the hinge causing the door to break the welds loosing its strength ,we had decided that we were having one of the doors with glass in it so needed to fix this problem .
Both doors were removed and we got to work on repairing them ,I ended up removing quite a lot of filler which had cracked due to the skin being loose from the frame ,I welded a large plate in to give it back its strength and treated any corrosion with rust treatment before filling .I'm no body man so filling and getting it right takes me ages with plenty of cock ups along the way but we got there in the end .

Once the door had been repaired and trial fitted  back on the van to check the hinges were in the right position, both were taken off again and sprayed using high build primer,my first attempt at spraying top coat didn't go to plan as  my compressor wasn't big enough so a new one was ordered . This didnt last very long before it seized up and I ended up buying a second hand one from a friend with a large tank for better air supply . 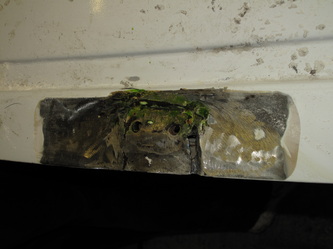 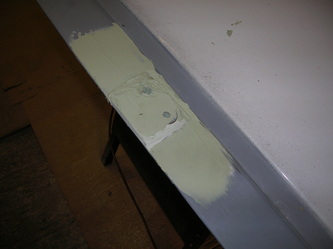 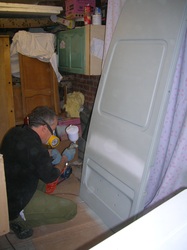 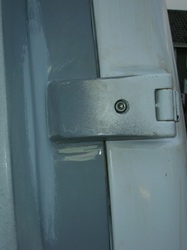 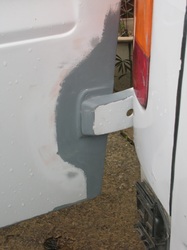