Well we have just returned from a very enjoyable weeks trip from the West coast too the East coast returning via the Yorkshire Dales .Our journey took us up the M6 heading through the south of the  Lake District following the Cumbrian coast,the weather was fantastic lovely blue sky's lighting up the distant fell tops around the Coniston range and beyond .
We took a lunch stop near EskMeals and parked up on the long sandy beach the fact you might not want to paddle your feet in the water for fear of them glowing in the dark didn't put us off. The views were great and we could see the Isle of Man from were we  parked and in the distance St Bees Head our destination and first overnite stop .
On arrival at St Bees we booked in and headed for our pitch for the night  we had been given a pitch over looking the beach what a view and even better what a view to wake up to ,we hooked up and donned our walking shoes for a walk along the coastal path to were the coast to coast walk starts from ,views into Scotland ,Isle of Man and the Lakeland fells could be enjoyed what a great way too end  the day. 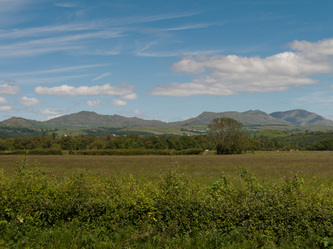 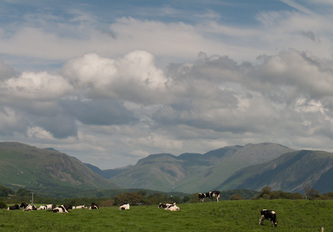 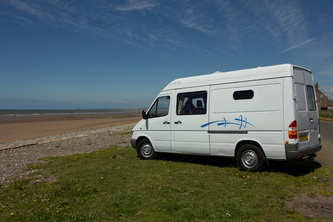 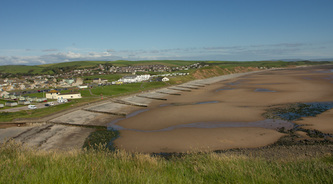 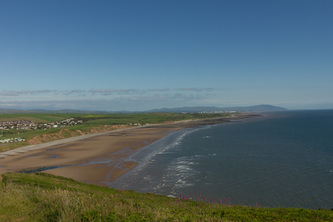 Waking up early the next day the beach was empty not a soul about ,the weather was set for another cracking day ,after packing our stuff up we set off through the Northern Lakes heading for Carlisle and onto Brampton were we picked up Hardrians wall.
We stopped at East Turret where you could see Blencathra in the Lake District and after a short walk along part of the ruins we headed for Alston driving through some very dramatic moorland ,our second night out was going to be a Wild camp so we had a few places in mind and eventually decided that Cow Green Reservoir was an Ideal spot for the night . 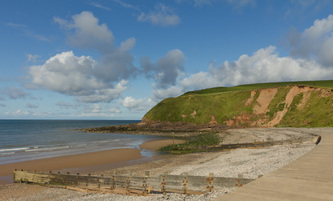 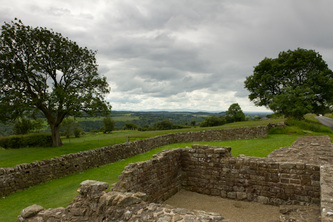 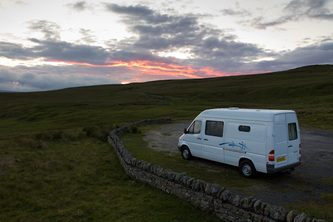 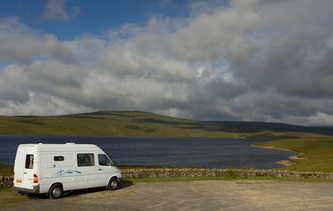 There is nothing better than opening the curtains to a great view and your not disappointed at Cow Green. After breakfast we headed for High Force in the forest of Teesdale ,here High Force suddenly and spectacularly drops 70 feet into a plunge pool below, making it England's highest uninterrupted drop of water probably  more spectacular after a heavy rain fall but never the less still worth a visit .

After our visit to the waterfall we then headed towards Barnard Castle then onto Darlington where we passed the Brick Statue of the A4 Mallard at the side of the A66 quite spectacular and must have taken some time too construct,we soon picked up the coast road for Saltburn by the sea and headed along this heading for Whitby which would be our stop for the next couple of days .
We were booked on a site called Sandhouse Farm ten minutes  from the beach and about a mile from Whitby centre easily accessible along the promenade arriving at the site we were shown our pitch  what a view from the van . 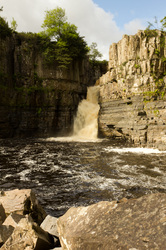 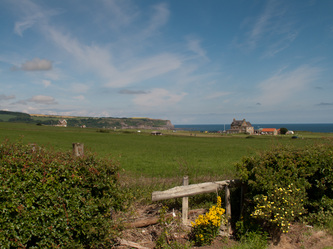 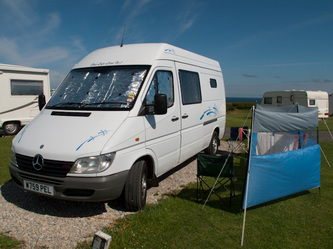 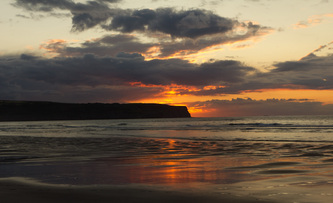 Waking up to another cracking day hot and sunny what more could you want ,our plan for today was to head to Goathland famous for Heartbeat then later in the day shopping at Whitby and then Whitby Fish and Chips plenty of salt and Vinegar, we arrived in Goathland and parked up had a walk down to the station  and got an ice cream we sat in the sun on the platform so quiet and relaxing could have stayed there all day . It was soon time to head for Whitby but not before we had dinner while we waited for the afternoon train to Pickering which was hauled by Standard class 4 tank 80072 .

A short drive back to Whitby for some shopping it seemed quieter than the previous day so we headed up the steps to the Abbey where you can see for miles and get a good view over the harbour  ,after shopping it was time for Whitby fish and chips but not before we watched the steam train leave Whitby , now I'm not a fish fan and if I get a bone that's it but that fish tasted great !! and even better no bones .
It was Our last night in Whitby so we took our cocker spaniel Jet for a run on the beach she loved it even though she smelt like a sweaty sock after getting wet !! 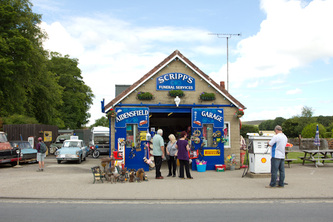 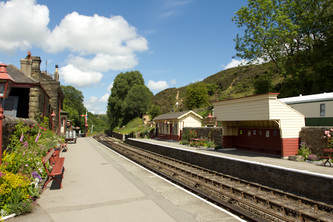 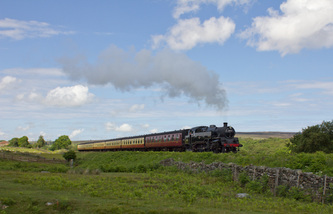 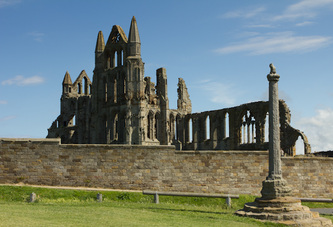 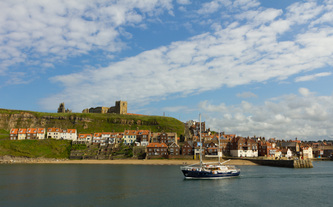 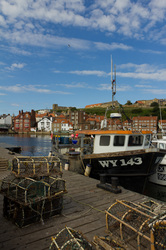 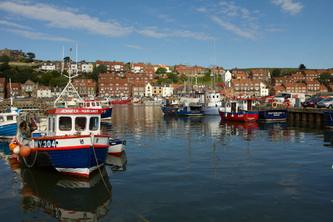 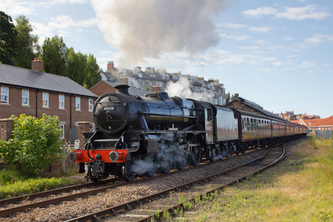 Saturday came all too quick and it was time to leave and head back we planned to Wild camp again on the way back ,but first we headed to see the Coast to Coast railtour which was passing through on its way to Scarbrough ,I decided to see it at Seamer so found a good spot we were about one and half hours early so made a brew and chilled out.
Now I have been photographing steam trains for many years and can prob count on one hand how many times they are early well this one was 30mins early the wife shouted David its coming as it passed by  I got a great view of it while eating my dinner in the van to much amusement of my wife and daughter but no picture!!!!!.
We left Seamer and headed for Leyburn .
Arriving at Leyburn we then took the road over the moors towards Kettlewell  narrow twisty roads for miles opened up onto vast moorland were we eventually found our stop for the night not a soul around apart from the sheep ,we watched the barn owl hunting in the field and the rabbits and lapwings going about their buisness . The beauty of wild camping is there is usually no mobile phone signal much to the annoyance of my daughter who by now had withdrawal symptoms and was going cold turkey ,peace and quiet Ah bliss.

Time to settle down for the night bed made  teeth cleaned and lights out or so we thought ,we had been asleep for a while when we were woke by someone or something banging on the van the van was being rocked we first thought someone had stopped and was messing around I jumped up and looked through the window to see sheep fighting for position on the sides of the van ,nothing else for it but to frighten them off ,  I jumped up and headed for the back I opened the back door to see a sea of eyes staring  back at me stood in my boxer shorts with my  torch,I dont  know who was more surprised me or the sheep  it was like the parting of the sea as I jumped out  and  rounded them up  chasing  them down the road its a good job no one was coming the other way it would have taken some explaining I think .
They came back again about 4 which kept jet our cocker busy giving off a little bark every time she heard them move ,We woke early to another cracking day and set off back home calling at Haworth on the way back . 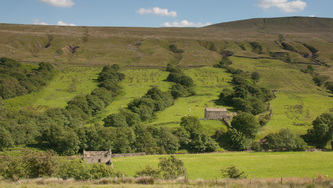 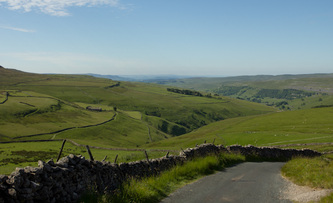 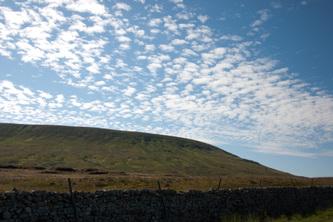 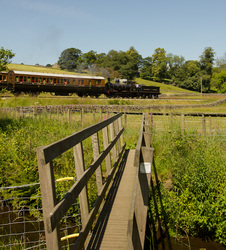 Well this was our first week away and was very enjoyable there are a few little bits too do with the van before our next trip but we were pleased how the van ran and how good the fuel economy was .